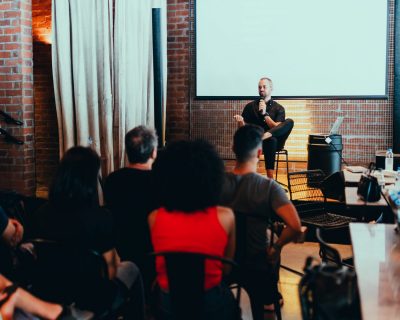 The event was co-organized by six European Commission-funded projects ending in 2021: Rhizome against Polarization, CHAMPIONs, YoungRes, WayOut, ARMOUR and BRIDGE.

PATRIR and the CHAMPIONs project were represented in several sessions, especially focusing on initiatives in Cluj on youth well-being, inclusive education and equal opportunities as pilot projects to prevent social polarization and extremism. The ALERT / ARENA platform was also presented as a sustainable option for locating and reacting to cases of urban extremism in Romania, Hungary, Poland and Germany.

The main objectives of the event were: 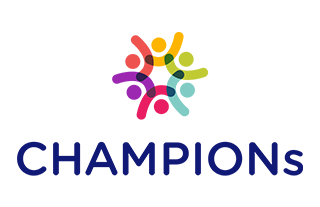 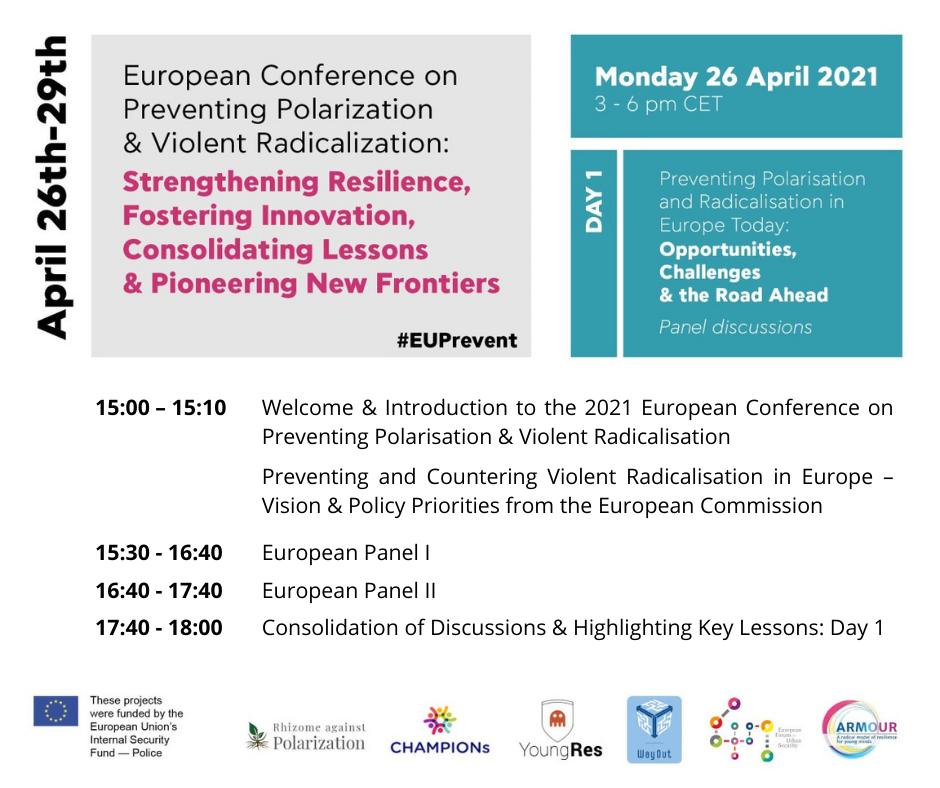 The first day was centred around the theme “Opportunities, Challenges and the Future Direction” in preventing polarization and radicalization in today’s Europe. 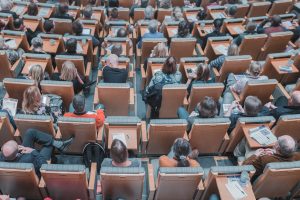 Sylvia Bottarin, from the Department for Migration and Home Affairs (European Commission), emphasized the importance of forms of collaboration in all sectors, the interaction between policymakers and researchers and collaboration at the local, regional and national level. She listed the new challenges that have emerged recently: the so-called “lone wolves” (cases of radicalization that apparently have no other social context), political tensions at the EU level, or new forms of extremism (for example, policies related to coronavirus restrictions).

Moussa al-Hassan Diaw (Derad EU, Austria) and Prof. Dr. Beate Küpper (Hochschule Niederrhein) discussed the dynamics of extremism and radicalization in Europe. They both claimed that these issues are much more complex than a simple religious phenomenon. Mr. al-Hassan emphasized some important lessons learned: more communication, both internal and external, is needed between departments and countries for successful prevention. He argued that the various monitoring tools used had led to the false identification of the terrorist threat and that work should not be based on a single monitoring tool targeting certain individuals. The threats of the far-right show how certain elements of extremism and radicalization today can go undetected. He went on to argue that ideology is spread through social media, and showed how propaganda is a mixture of European culture (hip-hop culture, for example) and EU narratives. Often, the media reproduces the narratives without a counterpoint and aggravates the misunderstandings of Islamist ideology. Cases are more complicated and a complex perspective of prevention and tailored decisions is needed (lone wolves are never truly isolated, they come from a political context).

Dr Beate Kupper pointed out the need to understand the terminology: who is an extremist, who is a radical? It is important that democracy activists rely on educational tools integrated into general education, and they should not be just for young people. He also asked other relevant questions: how effective are certain detection and prevention issues in the field if the minority / ethnic group is already considered a vulnerability? One solution would be a change of mindset towards those who can be radicalized and stressed the need to be transparent about the economic and social conditions that can lead someone to extremism. 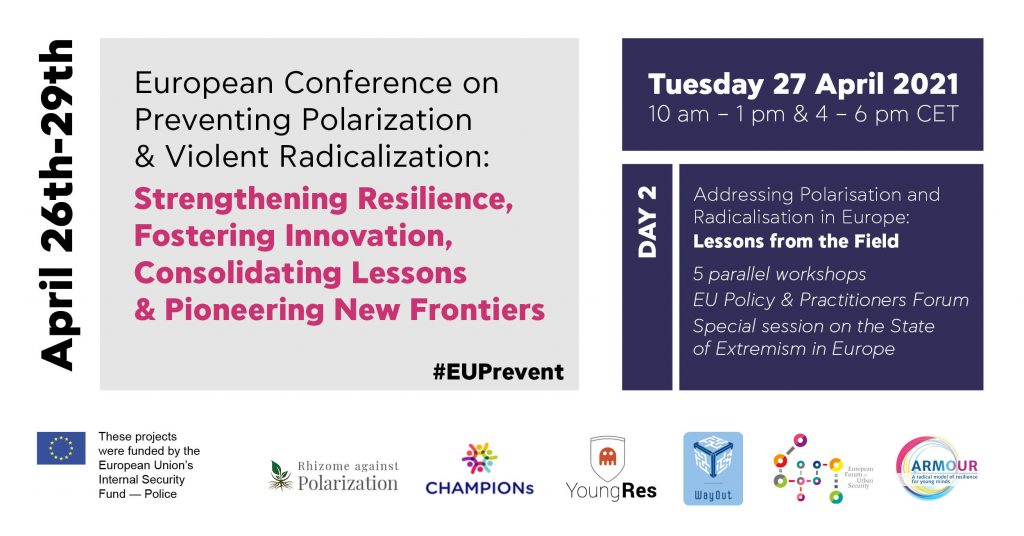 Luca Gervasoni (NOVACT) also stressed that human rights are more threatened today. He identified a new trend: the mobilization of dominant groups that use victimization to define themselves (the loss of power is linked to the far right).

Kai Brand Jacobsen (PATRIR) pointed out the challenges of methods based on a restrictive approach: the focus is on security and law enforcement, but many other areas are essential to developing an effective response. For example, education, gender equality and mental health. The problems are complex and multidimensional, and our political systems are not sufficiently developed to deal with them. The dependence on threat-based narratives (focused on military security) demonizes social categories and especially after the attacks of September 11 (2001), the security-based response and the military presence have aggravated the anti-democracy developments within European or non-European states. This aggravates the problems, rather than solving them, and accentuates the demonization of the other and therefore social polarization. There is a need for a community-based approach. The lack of learning systems to reach communities is another issue.

Several tools were presented for specialists working with young people, including in a training course, which will be available for use on the platforms www.firstlinepractitioners.com and www.traininghermes.eu.

The tools to be developed 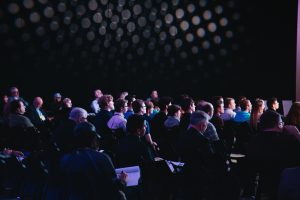 among young people have a practical nature and follow the model of cognitive-behavioural training. For example, one of the tools that need to be used among parents and teachers encourages reflection on who we are and what our social role models are, how they are, and why we consider them so important in our lives. 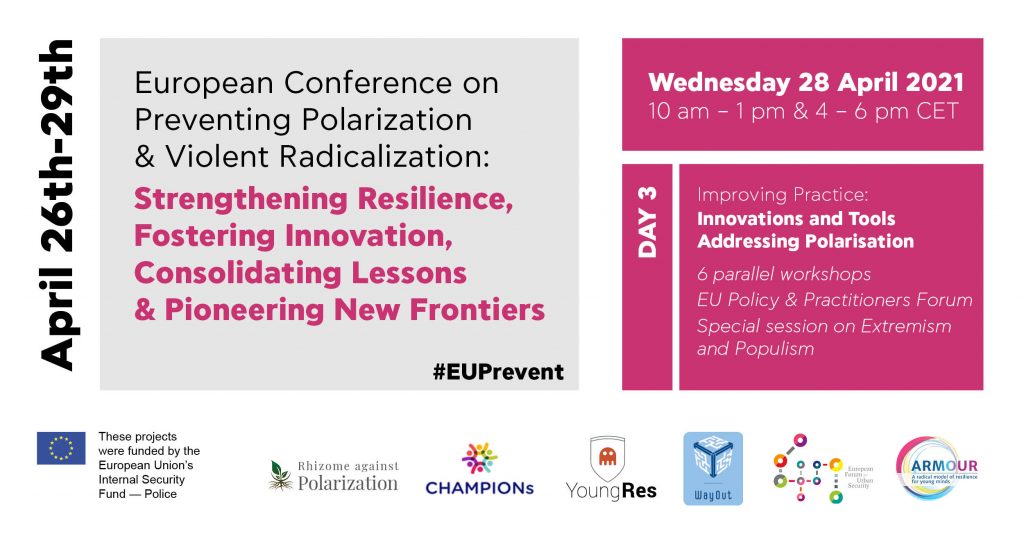 In the session on the role of gender policies, experts Ola Saleh and Christian Mogensen (Center for Digital Youth Care) discussed the role that gender plays in extremist narratives. Special attention was paid to lessons learned and recommendations on how sex and extremism can be better addressed by governments, civil society organizations and the European Union.

In the technology-focused session, TechSoup’s Francesco Perconti and ZettaCloud’s George Bara presented polarization technology solutions, such as game-based activism, plugins to identify fake news and online games as prevention tools in the technology session. This approach was completed by prof. Univ. David Camacho from UPM (Polytechnico Madrid) who presented (computerized) games as a solution against polarization, developed during the YoungRes project. The Alert / Arena platform within the CHAMPIONs project was also shown as a technological collaboration tool for specialists.

A special evening session on the state of extremism and populism included presentations by Naureen Chowdhury Fink (Soufan Center, USA) on a human rights-based approach to prevention and Dr Lisa Schirch (Toda Peace Institute, USA) who discussed multidimensional approaches to peacebuilding and the prevention of extremism. Francesco Farinelli (European Foundation for Democracy) provided information on the role of conspiracy theories in radicalization, and Prof. Kevin McDonald (Middlesex University in London) highlighted the risks associated with the gamification of terrorist violence.

Harald Weilnböck from Cultures Interactive discussed in a separate workshop about inter-agency cooperation and good practices in deradicalization. In the second education workshop led by the ARMOR project, practical tools were presented to encourage resilience among young people. The first highlights the cultural and identity factors, stating that we have, on one hand, our identity narrative, conscious and interchangeable and, on the other hand, a subconscious part that includes our variable identities (occupational, social, universal, gender, organizational). Even if the visible part is the conscious narrative of identity, radicalization is based on non-variable and unconscious identities. This means that sometimes we are not aware of how these identities influence us. Moreover, the key task of deradicalization will not work if it aims to deconstruct the conscious narrative we use.

In a special evening 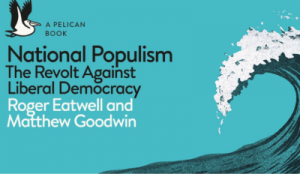 session, Roger Eatwell (Bath University) addressed the long-term conditions that triggered the (new) rise of national populism, such as political distrust, challenges to liberal democracy, and extreme poverty, based on his book, “National Populism: The Revolt Against Liberal Democracy” (2015), co-author Matthew Goodwin (University of Kent). 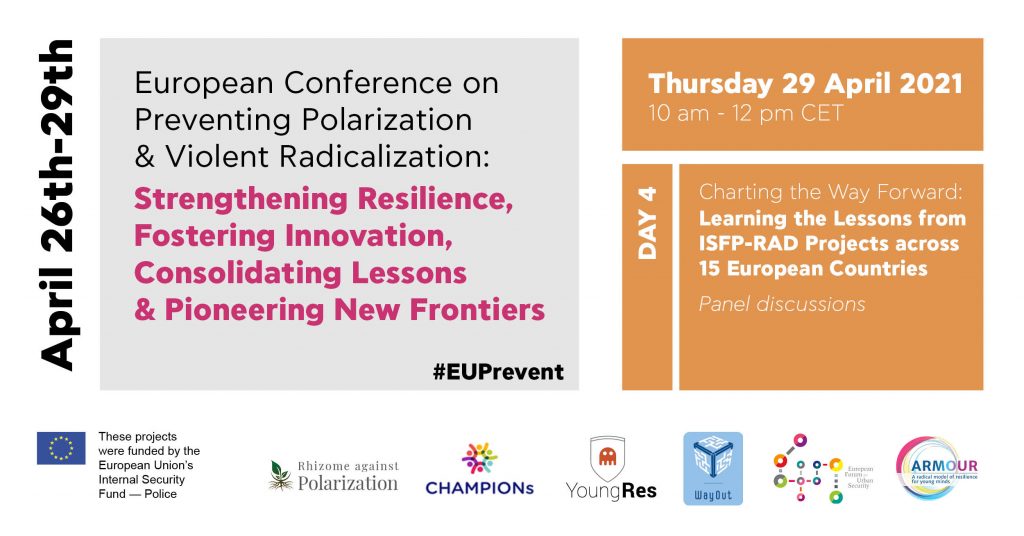 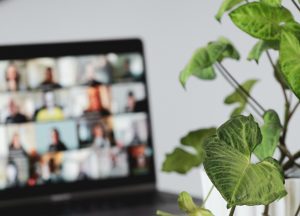 The third day highlighted the improvement of the response and prevention practices, as well as the role of technological innovations in this context. Six workshops addressed relevant topics in the field, such as youth policy covered by Elena Kundrat and Elisabeth Nagy of Südwind, which presented tools that put young people at the forefront of preventing radicalization, hatred and extremism by developing critical and reflective thinking about prejudices. Rotitsa Dzekova from CBD (Bulgaria) presented the centre’s experiences with hiring young people to counter the extremist narrative. Similarly, the OSCE’s Orlaith King presented the LIVE initiative, a project to strengthen young people’s capacity against extremism and its impact in the Western Balkans. Aleksandra Sawa from the Polish Social Security Institute shared new perspectives on youth-led projects and how they sometimes need ways to get involved other than on social media.

During the monitoring, evaluation and learning session, the experts dis 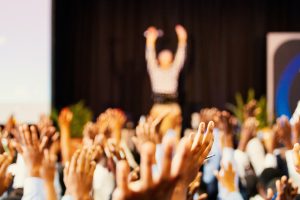 cussed the importance of feedback in order to improve policy and practice, including Marzena Kordaczuk-Was, representative of the Polish Internal Security Platform (PPHS).

The last day of the event allowed the detailed presentation of the six projects that organized the conference and consultations on directions in the process of preventing social polarization and extremism. 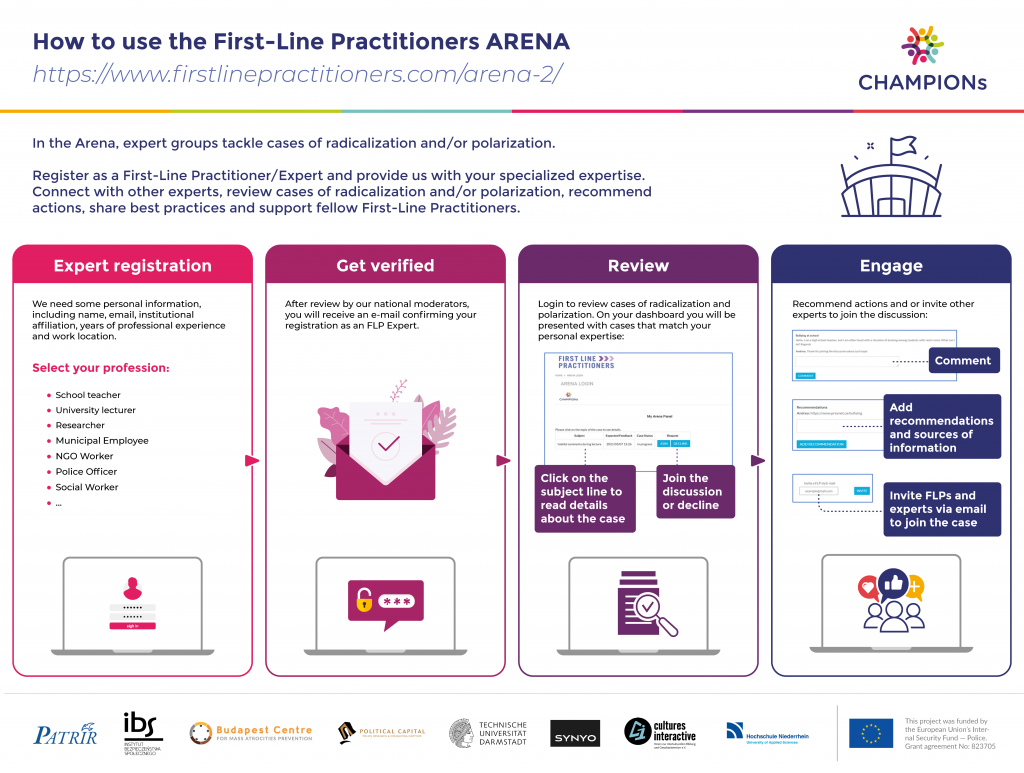