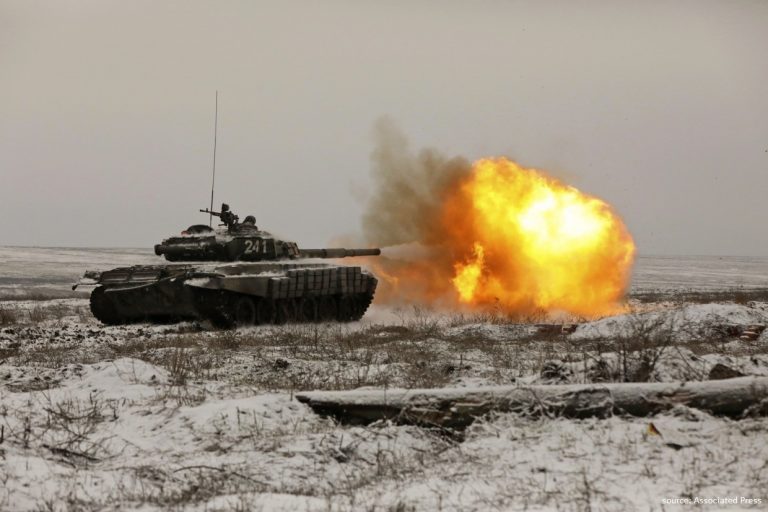 “War has broken out in Europe. This is the biggest crisis in regional peace and security in Europe in over 50 years. This is an issue affecting all the people of Europe and should be an issue of global concern. We must understand the gravity and urgency of this moment, and its implications for the people of Ukraine, the people of Russia, and for peace and stability in our world. Governments, citizens, all of us must recognize the danger of what can happen if we do not stop it now – and do not prevent it from getting worse. We cannot allow violence to continue or to escalate. The human, psychological, economic, and environmental devastation and costs of war are severe. The possibility that the war can intensify and spread is real. We have been brought to this situation because of the serious failures of our current approach to peace and security in Europe. We cannot allow the further escalation of war. What we need now is not more bellicose and combative statements but real, effective and concerted efforts by all actors involved, including governments and citizens across Europe and internationally, the United Nations General Assembly, and the international peace community, to end the war, address the immediate humanitarian situation, and work for real, lasting stability and peace for all the people of Europe.”

We call for an immediate end to the Russian incursion into the territorial space of Ukraine, an end to all hostilities and fire by all parties, and for a comprehensive conference for peace and security in Europe to address the urgency of this situation. This includes the full withdrawal of Russian troops and affiliated forces into the territory of Russia and concerted steps by all actors involved to immediately demilitarize and de-escalate the conflict.

We call upon all forces involved to actively refuse to use or take part in violence, and for commanders of all armed forces and units to refuse to take part in all acts of military aggression and war. We call upon their family members, colleagues, comrades, friends and relatives to use all available means to reach soldiers and all combatants and call for them to carry out an immediate cease-fire. We call upon the citizens of Russia, members of the Russian armed forces, Duma, Russian journalists, religious leaders, mothers, fathers, youth and all sectors of society to actively resist the war and acts of violence, call upon the Russian State to end the war, and use all means to communicate to Russian forces to immediately end their intervention in Ukraine and return to Russian territory. We call upon the people and government of Ukraine and all affected areas to immediately implement total and complete non-cooperation and nonviolent resistance as the most effective means to bring about the collapse of armed intervention and end the war. Violence will only fuel and be used to legitimize further violence. Systematic and complete non-cooperation and non-violent action will show the illegitimacy of violence and be the most effective means to end the current and illegitimate armed aggression. All parties must ensure the safety and protection of all civilians and refuse to take part in acts of violence. We ask for citizens around the world to use all their points of contact to reach people in Ukraine and Russia and show their support and call upon them in this moment of need to actively engage to end the violence.

As an urgent and immediate need we call for humanitarian assistance to all affected populations and for all parties and authorities, formal and non-formal, to ensure unimpeded humanitarian access for the ICRC and medical personnel to provide care as needed. This should be done without discrimination to where people are located and to ensure that all people affected by the escalation of tensions and violence receive shelter and immediate humanitarian support. Additionally, we urge both parties to the conflict to comply with the principle of distinction between civilian objects and military objectives as per international humanitarian law.

We call for the immediate intensification of diplomatic and comprehensive efforts to resolve the crisis. We call first and foremost upon all parties involved to dedicate themselves to immediately stopping violence and engaging in diplomatic measures to resolve the conflict. We simultaneously call upon all Governments to act through the United Nations General Assembly Resolution 377A “Uniting for Peace” to call for an immediate cease-fire and for the deployment of a UN Special Envoy. We also call upon all member countries of the European Union to proactively engage to bring about the immediate and peaceful resolution of the conflict.

We have been brought to the current situation also due to broad-based non-compliance and non-implementation by all parties of the Minsk Agreement, and failure to support practical and real solutions on the table including the deployment of United Nations Peacekeeping Forces. We have also been brought to this situation by the approach to ‘security’ in Europe since 1991 based upon expansion of military alliances and misuse of national resources for the maintenance and expansion of armed forces and missile deployments in the region. We call for a comprehensive conference to review Europe’s peace and security architecture and work towards an intelligent peace and security framework that guarantees the freedom, security and rights of all the people of Europe. This needs to involve concrete and practical measures to support the demilitarization of Europe, return to comprehensive arms control agreements by all parties, and support for the Helsinki Principles.

To support the immediate cessation of violence, provision of humanitarian assistance to all affected populations and comprehensive measures for peace and security in Europe and internationally we additionally call:

We know that not all parts of this statement will be easy for people to read. We know that in the midst of war people may feel that violence is the only means we have available to respond to violence. We believe that in this moment, violence will bring more violence, devastation, destruction and loss of lives. What we must meet this with is total solidarity, complete, total and active non-cooperation with violence; and united and complete opposition to armed intervention, war, and attempts to redraw borders by force. We believe it is the responsibility of all of us to bring about an end to the war, support the territorial integrity of Ukraine, and guarantee the safety and security of all people in affected areas. This statement is being translated into Ukrainian, Russian, French, Spanish, German, Romanian, Hungarian and more languages. You can assist translation and distribution of the statement into your language. Please send copies of translations to [email protected]