Are you interested in peace-building, conflict transformation, social justice, or generally just making the culturesofresistanceworld a better place? Our film nights provide you with the opportunity to hear from experts in the field, watch exciting films that take you to the heart of the action, and ask any burning questions you might have. If you’re thinking about getting involved in the world of peace, our film nights give you the chance to learn how you can get involved; otherwise, it’s a great way to meet new people, learn new things and enjoy a few drinks! 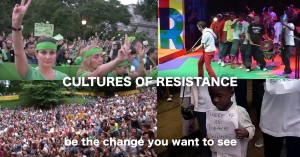 Urania Palace is a recently rennovated space, where we’ll be able to enjoy our film on a large screen. Entry is free, although any drinks must be bought from the bar.

Outline of the evening

19:30
Welcome and discussion from PATRIR

Description of the film

About the film (in the director’s words): Does each gesture really make a difference? Can music and dance be weapons of peace? Director Iara Lee embarked on a two-year, five-continent trek to find out. From MALI, where the music of Tuareg resistance rises from the desert, to BURMA, where monks acting in the tradition of Gandhi take on a dictatorship, moving on to BRAZIL, where musicians reach out to slum kids and transform guns into guitars, and ending in PALESTINIAN refugee camps in LEBANON, where photography, music, and film have given a voice to those rarely heard, CULTURES OF RESISTANCE explores how art and creativity can be the ammunition in the battle for peace and justice.